Things to Do in Kerala in June 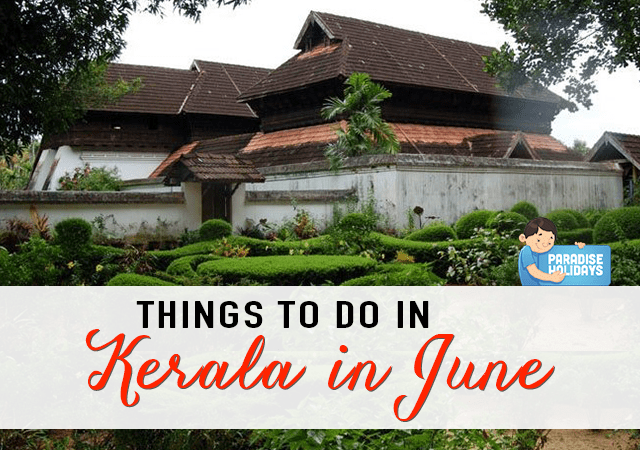 Visiting Kerala during June is an enthralling experience. The first showers of the South-west monsoon are a welcome respite from the scorching summer. This is also the time of the year when scenic beauty reaches its peak. There is a fresh dash of greenery everywhere. Rivers, waterfalls and a foggy landscape present an alluring spectacle that will soothe the senses.

Pack your bags and set out to visit some exotic destinations of Kerala this June.

1. A Day at Veli Tourist Village If you are looking forward to spending some quality time with your family, the Veli Tourist Village is one of the best places to hangout. Situated on the outskirts of Thiruvananthapuram, this place is an ideal picnic spot. It has a children’s park, a floating restaurant run by KTDC, stone sculptures by Kanayi Kunjiraman, ponds, cafeterias, food stalls to name a few.

You can go for boating in the Veli lake. Pedal boats, row boats and speed boats are available. Those who want to enjoy the Veli beach can take a stroll along the walkway. Bird watching and horse riding are some other attractions. One of the oldest boat races (vallam kali in Malayalam) in Kerala, the Champakkulam Boat Race is held annually on the Moolam day in the Malayalam month of Midhunam (June/July) on the Pamba river in Alappuzha district. The event heralds the boat race season in Kerala.

Boat teams belonging to various categories – chundan (snake-boat), iruttu kutthi, churulan, veppu among others compete with each other for the Rajapramukhan Trophy. The oarsmen row to the foot-tapping tunes of the vanchipattu (boat-song) and exhibit immense fortitude and perseverance much to the excitement of the cheering crowd.

Come and revel in this frenzy event which is exclusively unique to Kerala. Take a break from the hustle and bustle of the city and make a trip to experience Mother Nature. Standing at an elevation of 3399 ft above sea level, Gavi is a picturesque village located in Pathanamthitta district. This eco-tourist spot is a part of the Periyar Tiger Reserve and has attracted a lot of foreign tourists over the years.

Gavi has a wide range of flora and fauna. The place boasts of two gopher trees; the only of its kind in India. It is home to endangered species like the Nilgiri Tahr and the Lion-tailed Macaque and has more than 250 species of birds.

Gavi is one of the most sought after jungle safari locations in Kerala. Jeep Safari packages are available so that you can enjoy wildlife. Trekking, boating, outdoor camping, night safaris, a visit to the nearby cardamom factory are some of the other activities that can be tried out here.

June is probably the best time to visit Gavi. With the arrival of monsoon showers, Gavi looks truly like a ‘heaven’ on earth. You will leave thoroughly rejuvenated with a fresh burst of energy. A glimpse into the history of erstwhile rulers of kingdoms that existed in Kerala would be an interesting one. The Krishnapuram Palace in Kayamkulam located in the Alappuzha district is one such destination that showcases the beauty of Kerala architecture during the times of the kings of the Kayamkulam dynasty. The palace is now a museum under the protection of the Archaeology Department. It houses a number of ancient paintings, sculptures and other artefacts. The most prominent one is the 18th century mural exhibit of Gajendra Moksham (salvation of elephant) which is 3 metres tall – the largest mural painting so far found in Kerala. Its unique blend of colours and expression is one of a kind.

The palace is open from 9 am to 4:30 pm on all days except Mondays. How about enjoying some Western architecture and heritage? Then head straight to the quaint, but urban town of Fort Kochi.

Located south-west to the mainland of Kochi, Fort Kochi is a potpourri of cultures. The Portuguese, Dutch and the British had once dominated this town. The richness of the European architecture is reflected in the monuments built here.

The region was once the centre of spice trade with China and the Middle East. It has populations of Jews, Jains, Christians, Hindus and Muslims. The churches and houses are a delight to watch featuring a mix of Indo-European architectural styles. St. Francis Church, the oldest European church in India was built by the Portuguese in 1503. It owes its significance to the fact that Vasco da Gama was once buried there. Santa Cruz Basilica is another historic attraction here.

Originally built by the Portuguese in 1505, the basilica showcases artistic splendour and Gothic architecture to the fullest. Bishop House, Old Harbour House, Indo-Portuguese museum, Fort Immanuel and Dutch Cemetery are some of the other historic landmarks.

Don’t forget to visit the beach and watch the fishermen operating the Chinese fishing nets. There are a number of wayside eateries and shops selling fish nearby. Enjoy the backwaters by taking a stroll along the promenade and munching groundnuts. Fort Kochi can be best explored on foot although cabs are available. Another historic place to visit in Kochi is the Jew Town in Mattancherry. Situated about 12 kms from Ernakulam and 4 kms from Fort Kochi, this town has one of the oldest Jewish communities in India. Most of their ancestors have come and settled here as early as the 15th and 16th centuries.

A big vaarpu (bronze vessel), having a diameter of 3 metres, is one of the highlights of this street. There is also a philatelic bureau for stamp collectors. Walk down the street and you can feel the old-world charm of the buildings.

7. Take a Pilgrimage to Kottiyoor Image by User:Sivavkm via Wikimedia

Temple festivals are an important part of the cultural milieu of Kerala. Kottiyoor Vaishaka Mahotsavam in Kannur district is a 27 – day annual pilgrimage observed by Hindus in commemoration of the mythological Daksha Yaga.

It is celebrated during May-June months depending on the Malayalam calendar. This year’s festival began on 20th May and will end on 16th June.

In Kottiyoor, there are two temples situated on the banks of the river, Bavali – Ikkare Kottiyoor and the temporary shrine, Akkare Kottiyoor. The presiding deity in both the temples is Lord Shiva.

As part of the festival, makeshift thatched huts are erected on the premises of Akkare Kottiyoor which is located at the centre of a pond. Hundreds of devotees circumambulate the shrine mostly during rainfall. The temple authorities impose a dress code. No western wear is allowed. Women should wear mundu and veshti or saree; men should dress up in dhoti or mundu. The traditional bath towel, ‘thorthu’ should be flung over the shoulders. Women are not allowed in the temple during the first and last leg of the festival.

8. Relish the Aroma of Coffee at Wayanad Wayanad is the largest producer of coffee in Kerala. Vast acres of the district are occupied by coffee plantations. Mananthavady, Vythiri, Thirunelli and Sulthan Bathery are the main places where coffee is grown. There are mainly two varieties – Arabica and Robusta – of which Robusta is cultivated here.

The wet climatic conditions in Wayanad are favourable for coffee cultivation. Coffee is grown in the shade rather than exposed to direct sunlight. Dry processing – drying in the sun  – is adopted here that gives the coffee brew its trademark flavour.

Homestays, overlooking the lush green plantations, are available where you can relax and enjoy a cup of coffee and gratify your tastebuds!

These are some of the places worth visiting during June. So what are you waiting for? Catch the next train or flight and head directly to the “ God’s own country “!

Things to Do in Kerala in July